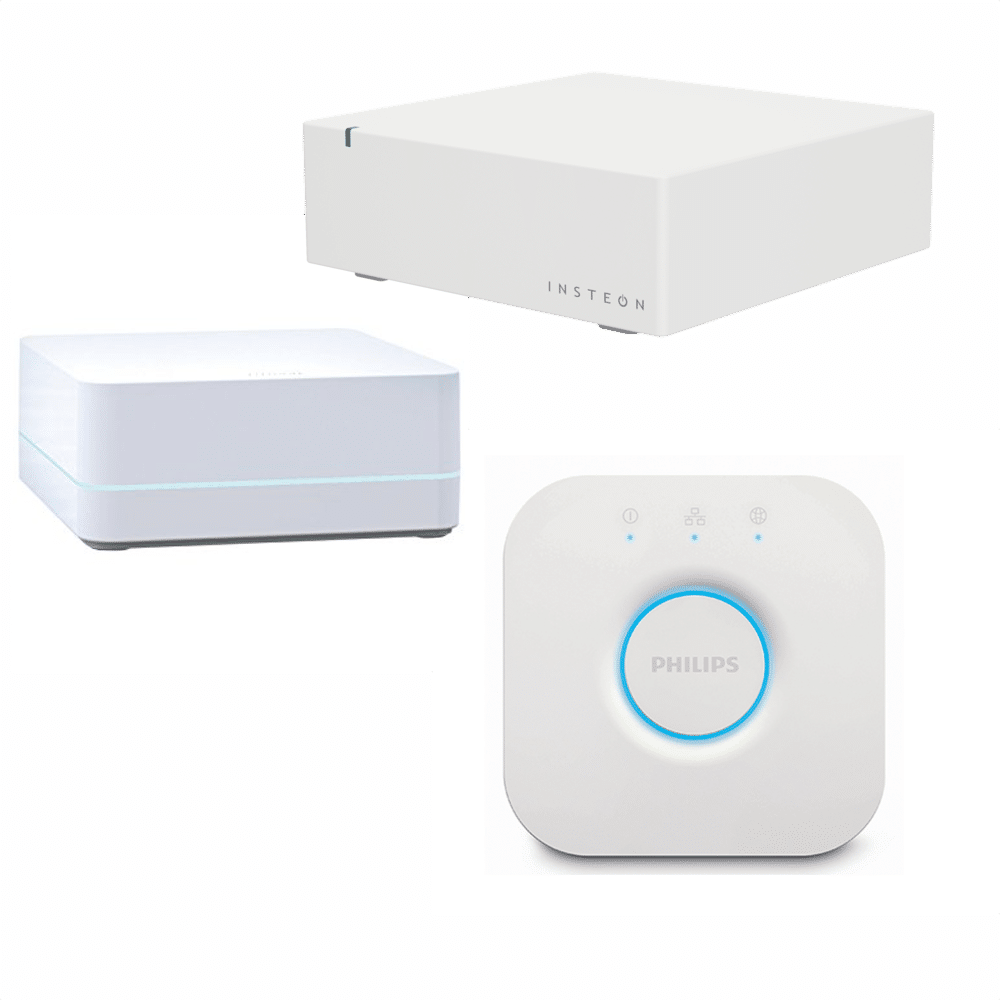 A small plastic box that fits in the palm of your hand. A power plug on the back, along with a jack to connect an Ethernet network cable and perhaps one or two other plugs of some kind. One or two small LED lights on the front and nothing more.

Beige, white, or off-white are the most common colors but they are also come in a sleek black or other designer color. Some are unimaginative squares or rectangles, some have rounded corners, and a few have oddball shapes but they all are cuddly, cute little boxes.

No big deal, just another piece of computer/electronic gear or gadget, right? But if I tell you it is a “home automation hub” then all hell breaks lose:

“Product X would be my first choice, but it requires a hub”

“A great lighting system, but you need a hub”

“Great product, affordable price, but won’t work without a hub”

I don’t know about you, but I’m sick and tired of reading product reviews where really good or great smart home products are knocked down by the reviewer because they need a hub. The worst offenders are the tech columnists that presume to tell us consumers what we want: “It’s a great product, but consumers won’t buy it because they don’t want to buy a hub”.

These self-proclaimed “experts” are expressing their own snobbish opinion dressed up with anonymous “consumer” attribution to justify their position. I work with a lot of homeowners designing and installing smart home systems and not a single one has ever said “I like your recommendations, but I don’t want to proceed because it includes a hub”.

The truth is, most consumers don’t know what a hub is and don’t really care. We all want home automation systems that are reliable, affordable, and do the job they are intended for. If along the way we have to plug in a small plastic box, what’s the big deal?

So what is a hub?

A hub is a small box that has a tiny computer inside to perform specific functions needed as part of a smart home control system. Unlike a general purpose computer, it is smaller, lighter, and all solid-state electronics. There are no spinning hard disks, video cards, or other accessories that make up a traditional computer. Due to the small size and limited components, most hubs can be convection cooled passively and do not need a noisy spinning fan inside either.

The price of a hub varies greatly depending upon what it does, how it works, and how it is sold. The cost can be as little as $20 or as high as $500 or $1000, but the typical consumer smart home hub is usually in the range of $50 to $200. The hub may be sold a la carte, included as part of a “starter kit”, or included with a larger system so the price of the hub itself is not always obvious.

It starts with a bridge (or gateway)

One of the basic functions that most every hub provides is a bridge. Using a combination of built-in hardware and software, the hub connects together two different systems that are not compatible with each other. The simplest and most common example is a network bridge between wireless and wired local area networks.

The hub will have a wired Ethernet RJ-45 jack to plug into your wired home network (usually by plugging into a corresponding RJ-45 jack on your router or cable modem box). The hub has one or more wireless radios built-in and it has the intelligence and processing power to connect (or bridge) devices between the wireless and wired network.

Many different wireless radio protocols are currently used in smart home devices. The most common are Zigbee, Z-Wave, & vendor specific (proprietary). Z-Wave is used for many different kinds of devices, especially security system sensors like door/window sensors, temperature sensors, humidity sensors, water leak sensors, and inside air quality sensors. Zigbee is heavily used for smart lightbulbs and lighting systems, but also can be used in other devices.

Vendor specific/proprietary radios are simply wireless radio systems that were designed by one company and only used by them for many of the same products as Zigbee and Z-Wave. Historically, they may have “gotten there first” before the standardized wireless hardware was available or they may prefer the marketing lock-in they have by not allowing other products to use their radios, but the end-result is very similar to Zigbee or Z-Wave systems.

Some of the most common vendor specific/proprietary radios are the products from Insteon, Lutron, Somfy, & many others. (Some companies use standard wireless radio hardware but run their own software protocols so they are still effectively private as they cannot communicate with any other company’s products.)

Hubs Have Advanced Features Too!

Most hubs have many advanced features beyond acting as a bridge or gateway including task processing and remote access. Task processing is the ability to have the hub perform automatic actions on your behalf without your smartphone or computer being turned on.

Simple examples are having the hub turn your outside lights on at sunset and off at dawn. More complicated actions can be setting “scenes” or “activities” to perform a whole series of actions in a single step such as a scene for “movie watching” or a daily routine such as “waking up” or “leaving the house”.

Remote access provides a connection to the Internet and the necessary ‘plumbing’ (logins, proxy servers, encryption) so you can access and control your smart home devices securely from outside your home using any Wi-Fi network or just a cellular data connection on your smartphone.

Extremely useful for doing things like turning on your heat (in the winter) before you arrive home or turning on your air conditioning (in the summer) to cool down your house while you are on your way back.

Hubs can have a lot of other functions, but task processing and remote access will be features almost everyone always wants or needs. Very often, hubs will have multiple radios and provide bridging or gateways between them. Need to have a Wi-Fi connection to a Somfy wireless shade system, there’s a hub for that! Need to link your hot tub control system to your Wi-Fi or wired Ethernet network? There’s a hub for that! (etc. etc. etc.)

As a homeowner, you will probably standardize on only one or two systems and so having one or two hubs to go along with possibly 10, 20, or 50 smart home devices is no big deal. But look at it from the perspective of a tech analyst / reviewer. If they are reviewing smart home LED lights from 5 different companies, they will end up with 5 switches or dimmers, 5 bulbs, and probably 5 different hubs sitting on their desk or bench with a tangle of power cords, networking cables, and accessories.

Worse, they may actually not be able to have everything plugged in at the same time as conflicting configuration settings means the various products will actually interfere with each other so they have to carefully turn off devices and keep resetting the hub and configurations. That’s enough to drive anyone crazy and in the artificial world of bench top testing, I wouldn’t disagree.

The second, and bigger objection is that they believe a hub is “one more thing to buy” that the consumer doesn’t want, doesn’t understand why they need, and doesn’t way to pay for it. I think early on this may have been true, but almost every smart home company now offers a “starter kit” that provides everything you need to get started in a single box for a reduced price over buying the pieces individually. This really eliminates the confusion on figuring out what to buy, and offsets the added cost of the hub with discounts on the included products.

Quick shopping tip: When expanding your smart home system, say a lighting system, it can be cheaper to buy more starter kits and throw away the extra hub. Shop around and compare prices; if you find a starter kit on sale you can save a lot of money this way.

The last complaint, and the one I feel is the most misleading, is that the reviewers believe the hub makes the product more expensive. A smart LED light that does not require a hub (because it has built-in Wi-Fi) might cost $50, while a smart LED light with Zigbee might cost $30 but requires a $50 hub for a total cost of $80.

Sure, it is more expensive if you only buy one smart LED light as a ‘toy’. But look at a typical family room or living room that has 4 lamps or lights. Buying 4 Wi-Fi smart lights will cost $200, while buying 4 Zigbee lights plus a hub will only cost $180. If you factor in the discount for a ‘starter kit’ it would make the hub-based solution even cheaper.

If you plan to automate a room or entire house and not just a single device, using a hub will provide significant cost savings, greater convenience, and more advanced capabilities than so-called “hub-less” solutions when the total cost of all the devices is compared.

So are you still afraid of the ‘big bad hub’ ? Let me know what you think.